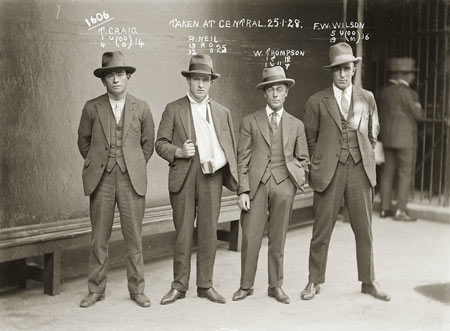 The photographs in this exhibit were made by inmate photographers, although their identities still have not been determined. Prison records from 1915 indicate that there were five convicts who listed their previous occupation as photographer. Reports also document that there was a room in the prison designated as the «Photograph Gallery» and that the current warden, Edmund M. Allen, had an annual budget for photographic expenses of almost $1000, approximately three times greater than that of previous administrations. Many subjects illustrated by these prints, such as the Honor Band, did not exist prior to Allen’s administration. These public relations photographs were taken by an anonymous series of inmate photographers under official direction. It was not necessarily their purpose to create a clear understanding of what prison is and what it does to the minds of those who live there, but it was their purpose to illustrate the progressive changes which were taking place during an era of penal reform which lasted until the beginning of World War I, when public and political attention was diverted to other areas.

The photographs represented here were preserved and exhibited by Richard Lawson as a professor at Southern Illinois University, Carbondale, in 1981. Currently, there are now over one hundred prints available for private and public collections.